Ribhu Gita or ” Siva Rahasya ” is the teachings of Lord Siva to His devotee Ribhu.

Bhagavan Ramana’s often referred to the Ribhu Gita in his talks specially Chapter 26.

“one could spontaneously pass into the state of sahaja samadhi, or the natural state of true Self-realization….You must cover your vegetables when you cook them, then only will they keep their flavour and be fit for food. It is the same with the mind. You must put a lid over it and let it simmer quietly.Then only does a man become food fit for God to eat”.

-The concept ‘I-am-the-body’ is the sentient inner organ (i.e. the mind). It is also the
illusory samsara. It is the source of all groundless fears. If there is no trace of it at all,everything will be found to be Brahman.
-The concept ‘I-am-the-body’ is the primal ignorance. It is known as the firm
knot of the heart (hrdayagranthi). It gives rise to the concepts of existence and non-existence. If there is no trace of it at all, everything will be found to be Brahman.
-Jiva is a concept, God, the world, the mind, desires, action, sorrow…
all other things are all concepts.
-The mind is unreal. It is like a magic show. It is the son of a barren woman,absolutely non-existent. Since there is no mind there are no concepts, no Guru, no disciple, no world, no jiva. All concepts are really Brahman.
-Everything is in truth Brahman. Abiding is to be in the undifferentiated state. It is inherence (in Brahman). It is wisdom. It is Liberation. It is the natural state (sahaja). It is Brahman. It is Siva. 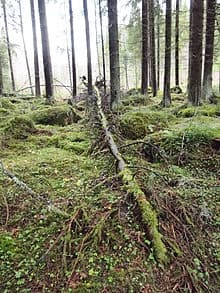 “If a tree falls in a forest and no one is around to hear it, does it make a sound?”
philosophical thought experiment that raises questions regarding observation and knowledge of reality.
…..’Drishti Srishti Vada’ (Drishti=Sight, Srishti=Universe, Vada=Theory), which puts forth the argument that the universe, or that which is seen, arises only after the seer, and has no independent existence apart from the seer i.e. order of precedence of sight and the seen—first there is sight (‘Drishti’) and then there is the seen (‘Srishti’).

Ramana Maharshi made numerous references to the world being only a concept in the mind. 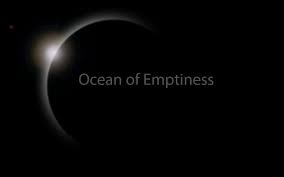 “The mind is like akasa (space). Just as there are the objects in the akasa, so there are thoughts in the mind. The akasa is the counterpart of the mind and objects are of thought. One cannot hope to measure the universe and study the phenomena. It is impossible. For the objects are mental creations…The universe is only an object created by the mind and has its being in the mind.” 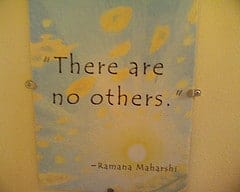