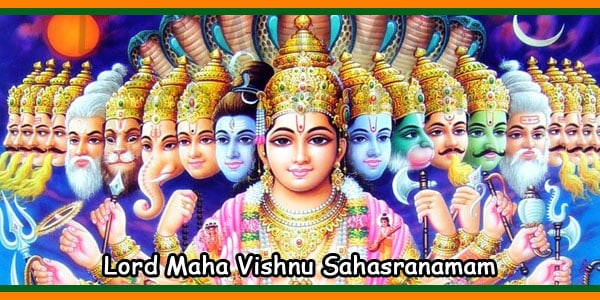 This not only strengthens the brain neuron chips but also emits the brain wave at a very conducive limits that can revibrate the energies into one’s own body. Besides, the thought and thinking of a person can also be regulated to divine path. That’s the exact value, which bring every Bhakta known as devotees of Sri Maha Vishnu.

Every Name of Sri Vishnu has a meaning to it; quite apart – the phonetic vibrations by chanting each Name known as “Nama” and the chain of names known as “Namavali” produces very fantastic results of vibrations that are very essential for humans knowledge and wisdom. What the phonetic sound vibrations create to the chanter or to the one who hears it is very well established by many eminent scholars. For attainment of spiritual liberation, one must involve himself/herself to the glories of the Lord Sri Mahavishnu, by reciting the entire slokhas.

The birth of Sri Vishnu Sahasra Nama – The 1008 Names of Sri Maha.

The legend would have it that at the end of the epic Mahabharata war, Bhishmacharya was awaiting the sacred hour to depart from his physical body unto the lotus feet of the Lord. Yudhishtira, the eldest of the Pandavas, was desperately looking for the answers to matters relating to Dharma and Karma.  Lord Sri Krishna, who understood Yudhistira’s uneasy mind, guided him to Bhishma to learn insight in to this precious knowledge.  It is relevant to mention that Bhishma was acknowledged to be one of the twelve most knowledgeable people.  The other eleven being Brahma , Narada , Siva , Subramanya , Kapila , Manu , Prahlada , Janaka , Bali, Suka and Yama .

As directed by the Lord, he meets Yudishtra. At their meeting, Yudhistira presented Bhishma with six questions.

Who is the greatest Lord in the world?

Who is the one refuge of all?

By glorifying whom, can man attain peace and prosperity?

By worshipping whom can man reach auspiciousness?

What is, in thy opinion, the greatest Dharma?

By doing Japa of what, can creature go beyond the bonds and cycle of birth and death?

Bhishma responded by reciting the one thousand names now hailed as the Vishnu Shasranama, and reminded him that either by meditating on these names or by invoking the names through archana (Offering), our minds can be lifted to higher consciousness.

Once, way back in the 1940’s or 50’s, someone was interviewing Sri Maha Periyava. That gentleman recorded the interview using a tape recorder. Periyava then posed a question,

* “Does anyone know which is the oldest known tape recorder?” *

Nobody was able to answer. Then Sri Maha Periyava asked another question;

“How did Vishnu Sahasranamam come to us?”

Someone said Bheeshma Pitamah gave it to us.

All agreed. Then Sri Maha Periyava posed another question;

“When all were listening to Bheeshma on the battlefield, who took the notes at Kurukshetra?”

“When Bheeshma Pitamah was glorifying Krishna with Sahasranamam, everyone was looking at him including Sri Krishna and the sage, Veda Vyasa. After he finished the 1000 Namas, all opened their eyes. The first to react was Yudhistirar. He said, ‘Pitamah has chanted 1000 glorious names of Vasudeva. All of us listened to it but none of us have noted it down. The sequence is lost ‘. Then all turned to Sri Krishna and asked for His help. As usual He said, ‘I was also listening like the rest of you. What can we do? ‘

Then all beseeched Sri Krishna to help them recover the precious rendition. Then Sri Krishna said, ‘It can only be done by Sahadeva and Vyasa will write it down.’

Everyone wanted to know how Sahadeva could do it. Krishna replied, ‘Sahadeva is the only one amongst us wearing the Shuddha Sphatika. If he prays to Shiva and does dhyanam, he can convert the Sphatika into waves of sound and Vyasa can write it down. Then both Sahadeva and Vyasa sat in the same place under Bheeshma Pitamah, where he had recited the Vishnu Sahasranamam. Sahadeva started doing the dhyanam to recover the sound waves from the Sphatika.

The nature of Sphatika is that it will capture sounds in a calm environment which can be got back with proper dhyanam of Maheswara who is Swethambara and Sphatika. So, the world’s earliest tape recorder is this Sphatika which gave us the wonderful Vishnu Sahasranamam. When Sri Maha Periyava explained this all were stunned… From the Sphatika recording, the grantha came to us through Veda Vyasa.

The main body of Sri Vishnu Sahasranama consists of 107 stanzas which contain the one thousand names of Sri Maha Vishnu.  Every one of the one thousand names is full of significance and refers to one particular guna (quality, characteristic, or attribute) of Paramatma.  These names invoke a sense of bonding with the Lord.  The meanings of the names give us an understanding and depth of God as there is a deep connection between the name and the named.

Does the Lord get absolutely defined by these one thousand names?  The Vedas affirm that God is neither accessible to words nor to mind.  It is said that you cannot comprehend the Paramatma with the human mind alone, even if you spend all your life trying!  Given this infinite nature of the Paramatma, who is not governed or constrained by any of the physical laws as we know them, the choice of a thousand names of Vishnu by Bhishma should be recognized as a representation of some of his better known qualities that are repeatedly described in our great epics.

Some might say that they do not understand the meaning of the Sanskrit words, and therefore do not feel comfortable chanting them.  But learning the chanting of prayers even without knowing the meaning is a worthwhile act, and can be compared to finding a box of treasure without the key.  As long as we have the box, we can open it whenever we get the key of knowledge later.  The treasure will be there already.

Others might feel that they do not know the correct Sanskrit pronunciation, and do not want to chant incorrectly.  There is an analogy of a mother to whom a child goes and asks for an orange.  The child does not know how to pronounce the word “orange” and so asks for “ange”.  The mother does not turn away the child and does not refuse to give the child the orange just because the child does not know how to pronounce the word.  It is the bhaava (spirit) that matters, and so as long as one chants the name of God with sincerity, considerations such as not knowing the meaning, not knowing the pronunciation, etc, do not matter, and God will confer His blessings on us, there is no way a devotee of Vishnu can meet with any dishonor or disgrace of any kind.

The necessity of cleansing our body regularly to maintain hygiene and good health is recognized by everyone.  But with the busy nature of today’s world, we do not see our mind the same way as we see our body.  As a consequence, the need for keeping our minds clean is not appreciated.

Those who do not cleanse their mind on a regular basis become mentally ill over a period of time..  Prayers are a means to mental cleansing when they are chanted with sincerity and devotion.  The importance of chanting Sri Vishnu Sahasranama is that the deity being worshiped is none other than Vasudeva.  Sri Vedavyasa, who was responsible for stringing the naamas together in a poetic form, points out that it is by the power and command of Vasudeva that the Sun, the Moon, the stars, the world and the oceans are controlled.  The whole universe of the Gods, Asuras and Gandharavas is under the sway of Lord Krishna.  In Bhishma’s expert judgment, chanting Vasudevas’s name with devotion and sincerity will ensure relief from sorrows and bondage.  The person who recites is not the only one who benefits, but also those who for whatever reason are unable to chant benefit by just hearing the chanting as well.