In the journey towards divinity, Kedarnath has always been a Ridge too far.  It is one among the Char Dhams or four primary religious destinations, the others being Badrinath, Yamnotri and Gangotri. While Badrinath is accessible by road, the other destinations involve trekking.  Kedarnath is perhaps  the most difficult to access. Personally there has been another connect – in 2013 a trip planned to Kailash Manasarovar had to be abandoned after the cloudburst that inundated the various tributaries of the Ganga. The worst hit was perhaps the Mandakini river flowing through the Kedarnath valley.  This time around we were successful in going to Kailash albeit with a few hiccups (please see https://in-search-of-divinity.fleeky.one/?p=2353)  Having visited Badrinath,  Yamnotri and Gangotri, and of course Kailash the time was now opportune to visit Kedarnath.

As we drove along the Alakananda towards Rudraprayag where the Mandakini tumultously meets it we were rewarded with spectacular views of mist covered mountains. 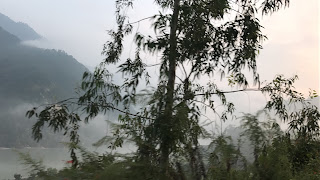 At Rudraprayag the  road to Kedarnath turns left and follows the Mandakini, while the other road along the Alakananda leads to Karanprayag and onward to Joshimath.  The Mandakini true to its name is at times furious and at times placid and startlingly blue. The snow clad peaks overlooking Kedarnath were now beginning to be visible. 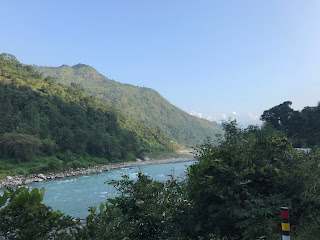 It is at Guptkashi that the myth surrounding Kedarnath begins.  After the Kurukshetra war  the victorious Pandavas  were afflicted with guilt at having killed their Gurus and cousins. Krishna suggested that they seek Shiva’s forgiveness and thus their quest for Shiva started from Kashi or modern day Varanasi. By the time they could reach Kashi, Shiva had left for the Himalayas as he was angered at the senseless killing. At Guptkashi the  Pandavas had a fleeting glimpse of Shiva in the shape of a bull but before they could get hold of it the bull magically disappeared and hence the name Guptkashi or secret Kashi. The Pandavas built Kashi Vishwanath Temple for Shiva at the site of a water tank where two streams merged. The adjoining temple has Parvati riding a bull.  Indeed Shiva is said to have proposed to Parvati here. The marriage took place at Triyuginarayan Temple, ahead of Sonprayag some 33 kms upstream. More recently, when Aurangzeb had destroyed the Kashi Vishwanath Temple in Kashi the linga was moved to Guptkashi for safekeeping.

As the road winds upwards along the Mandakini Valley, there are several places such as Phata and Bhadasu from where helicopters take off for Kedarnath covering the trek route of 16 kms in barely 10 minutes. We resisted the efforts of our well wishers to take the easier option since to us the journey was more important than the destination. The road comes to an end at Gaurikund from where the  trek begins. The first signs of the havoc caused by the floods  in 2013 was now visible. A parking facility at Gaurikund had been swept away along with hotels and other structures. Parking was now available only at Sonprayag a further five kms downstream. Sonprayag too had been badly affected by the floods but was recovering at a slightly faster pace since the valley was broader here.

The sun was beating down on us as we set off on foot along the green and verdant Mandakini Valley. A sturdy mule carried our luggage since we planned to stay the night at Kedarnath. The route is interspersed with waterfalls as the road gradually winds upwards. 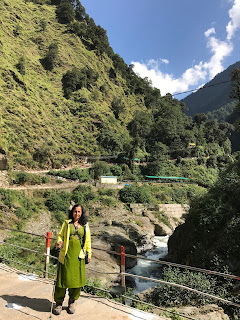 At Bheembali, about 6 kms upstream, the Mahabharata story is reinforced at the temple to Bheem the mightiest among the Pandavas. At Guptkashi too it was Bheem who ran ahead of his brothers to catch Shiva. But Shiva who had taken the shape of the bull Nandi,  vanished inside a cave. It is perhaps testimony to the need for courage and strength if one is to relentlessly seek God.

The trail abruptly vanishes at Rambada  located another km upstream. Locals told us that Rambada was a small hamlet which was entirely wiped out by the flood in 2013. Two small temporary structures and a faint trail mark the only visible traces of Rambada. This trail was abandoned and a fresh alignment across the Mandakini chosen since the hillside had become very prone now to landslides. The new alignment is some 2 kms longer than the older route and relatively steeper.

The difficult part of the trek begins after Rambada as the balance 9 kms or so is mostly uphill and the altitude increases rapidly as one approaches Kedarnath which is at  a height of 3580 metres or so. The lack of oxygen begins to affect the cardiovascular efficiency and it is preferable to walk slower than normal. By now the chill in the air too is palpable. One advantage though is that  one does take the name of Shiva with every step! Just as we crest the slope the village of Bhaironghat across the Mandakini becomes visible. This village was cut off by the floods from both sides. The locals attribute it to Bhaironghat Temple that still survives.

Bhima is said to have finally caught the elusive bull Nandi when he placed his legs on two  peaks astride the valley. Nandi which had thus far successfully hidden itself among other cattle  was left alone as they scampered for safety. The temple was constructed by the Pandavas at this site for Shiva as he finally acceded to their request for blessings and forgiveness. Not surprisingly, the sanctum sanctorum is surrounded by statues of all the Pandavas including Kunti and Draupadi. Krishna, the cousin of the Pandavas is there too. But the pride of place is granted to the Shiva Linga which is in the centre of the sanctum sentorum.

A bird’s eye view of the flood ravaged Kedarnath Town reveals a row of tents and some effort at reconstruction. The Kedarnath Peak at 6968 metres towers over the temple town. The Chorabada glacier to the North West is the source of the Mandakini and the companion  glacier to the North East is the source of the Saraswathi which meets with the Mandakini just to the South of the town. The cloudburst over the Gandhi Reservoir situated to the North East on 17 Jun 2013 resulted in the devastating floods. The reservoir no longer exists.

For a town on the pilgrimage circuit it is surprisingly uncrowded. Indeed we could have two quick darshans of the bedecked Shiva Ling due to the sparse crowd. While circambulating the temple we come across the boulder that diverted the flood waters and saved the temple and indeed the faith of millions.  The linga in the sanctum sanctorum too was undamaged despite the sand and debris floating through the temple. It must have been testing times for the pilgrims who perished in the tens of thousands. While geologists attribute the temple being safe to the strong interlocking stones that formed the foundation as also a clever siting of the temple itself in relation to the other flimsy structures in the vicinity, it is undeniable that faith of millions also survived when the temple emerged unscathed.

Sitting in the sanctum sanctorum at dawn the next morning the vibes were palpable and the scalp tingled. The linga is believed to have been a natural meteorite stone. Indeed the cumulative faith of millions of devotees has invested the temple with its positive vibes.

On the long walk back to Gaurkund I reflected on my experience. Prime Minister Modi had so memorably tweeted in May this year that all should come and experience for themselves the divinity of Kedarnath. The place was definitely infused with divinity but at the same time I was forced to acknowledge that unplanned development and constructions in the flood plains and most importantly human greed were responsible for the large scale loss of human lives. To retain the sanctity of Kedarnath it is important that the ecologically fragile Himalayas be conserved. One way of doing this would be to place restrictions on the movement of motor vehicles and helicopters and control access of pilgrims all of which only add to immense pressure on the fragile ecology and  scarce local resources.

We came away convinced that unless man learns to live in harmony with nature, he is doomed. Nature will always have the last laugh and restore equilibrium with or without man’s help. The choice is ours 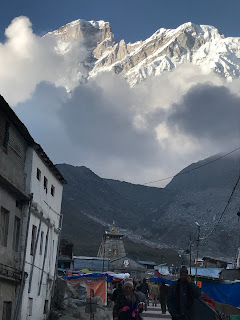