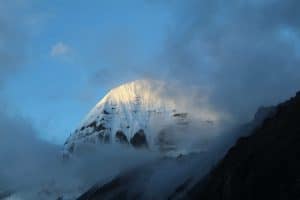 Part 1 covered the experiences of 40 pilgrims who had gathered from all over the country in Delhi on 12 Aug and the sojourn through Kumaon Hills over a period of nearly ten days till they crossed over into China on 26 Aug.

Expanding the frontiers of understanding

As we walked down to our buses waiting 500 metres below the Lipulekh pass, I mused on the history of the region. Our Rishis had a unique understanding of the geographical frontiers of the Indian civilization. Recognizing that the regions around Kailash and Manasarovar region were the source of three rivers that fed the Indian sub continent – Indus, Sutlej, and the Brahmaputra, they extended the ideological frontiers by weaving myth and legend around these regions. Militarily, Zorawar Singh, the Dogra General, subdued Tibet by forging ahead to Gartok bypassing Manasarovar. He defeated the Tibetan commander who had fled to the fort in Taklakot. Subsequently he and his troops went on a pilgrimage to Kailash and Manasarovar. In the process he had succeeded in integrating Ladakh after a Treaty in 1841. He died fighting in Taklakot where there is a memorial in his name. Even the British balked at extending the frontiers to this extent and were content in ensuring Tibetan autonomy.

Our buses took us to the Customs and Immigration Building at Taklakot for immigration formalities. By now it was bright sunlight. By Shanghai Standard Time it was now almost noon when we finally reached our hotel. Our Tibetan guides now took charge of us after a sumptuous lunch cooked by Nepalese and Indian cooks who were in Taklakot on a work permit. The next two days were given over to acclimatization since Taklakot is at 3940 metres. By now we had all been affected by the symptoms of acute mountain sickness – sleeplessness, a nagging headache and depressed appetite. Noses peeling were par for the course. The best cure we found was a nose mask available for 3 yuan for no sun screen could actually prevent sunburn on the Tibetan plateau. All this did not stop us from exploring Taklakot which had a Nepalese Market, an Indian Market and a Chinese market. The legacy of Lipulekh pass as a major trading route was intact. We were pleasantly surprised to note that Prestige pressure cookers, Parle G, Centre Fresh and the ubiquitous Haldirams were all very popular. The locals did not appear too friendly for obvious reasons. We kept a wary distance from them and all conversation was done through calculators. There were a large number of Nepalese labourers on work permits. Most of them had been to India with one of them even having an Indian PAN card. Modinomics strikes again!

After two nights we were itching to be on the road again. Our next destination was Darchen 102 kms away passing through Rakshas Tal and Manasarovar. Rakshas Tal was the location where Ravan was said to have meditated on Shiva. A few intrepid souls took a dip in both Rakshas Tal and Manasarovar as though to balance the two opposite poles of their personalities. It reminded me of the story of when the devas, the asuras and human beings had approached Vishnu for diksha. They were all told the single word ‘dh’ and went back satisfied. The asuras took it to mean Daya or compassion. The devas took it to mean daaitv or control over sense organs and for the humans? It was daan or charity! Now we have all three aspects within us and the close juxtaposition of Rakshas Tal and Manasarovar was symbolic of this.

As soon as we reached Darchen we sought in vain for a darshan of Kailash. The cloud cover was ominous and we wondered when grace would descend on us. A few enterprising Tibetan traders seeing our buses converged quickly on us selling crystal and rudraksh beads. Darchen was just two streets of shops. We did find a grocer selling pecan nuts and walnuts – very vital sources of energy for the severe tests lying ahead of us. The next morning the Parikrama began from Yama Dwar 10 kms away. Here prayers were offered to Yama – to spare us Swarg for now and allow us to complete the Parikrama.

Porters and ponies were now allocated on a lucky draw basis. I was lucky to bag Gyantse and his pony Dasakpa. I did not intend to use the pony but it was a mobile ambulance in unfamiliar country. Gyantse was very kind always waiting for me with my flask of hot water as I trudged along the Parikrama. My wife had a porter and a pony. Deraphuk our next destination 11 kms away was at an height of 5060 metres and due West of Kailash. Our LO had warned us that he would leave at 4 PM for Charan Sparsh the closest we could get to Kailash. We barely managed to make it with 20 minutes to spare. By 4 we were ready for a further climb of 2.5 kms. On this stretch there were no porters and ponies. It had started raining and as we got closer to the glacier a light snow began to fall making our climb even more difficult. It was almost dark when we reached the glacier from where the Kuraily river emanates from the West Face of Kailash. Kailash was still hidden by dark clouds. It was time to begin our descent.

As I walked back I spotted my wife with a few others making their way slowly. I decided to wait for her till she returned from the glacier. I had Rajesh Lochab a Professor in Hissar University and Satish Chand Chauhan a retired ONGC employee for company. That decision to wait turned out to be fortuitous… gradually Kailash began to reveal itself. The darkness began to dispel, and it was bright sunlight soon. Kailash was revealed in all its glory – my fellow pilgrims were overcome, some shedding tears as the very purpose of our visit had finally been achieved.

Meanwhile, even more miraculous events were happening back at Deraphuk. Mythili had stayed behind to nurse Bharati Ben who was down with mountain sickness. As she helped her and Chandrama to the toilet down the road she happened to see Kailash clearing. Just then a few locals were passing by one of whom had binoculars. A swift request and Mythili was granted the same view we had from further up the mountain! Indeed God moves in mysterious ways his wonders to perform. We finally made our way down tired and happy. The next day would be the most strenuous as it involved crossing the 5650 metre high Dolma pass followed by a steep descent to zunzui phu some 20 kms away from Deraphuk.

The next day ever faithful Gyantse arrived bright and early when it was still dark and we were off. We had been warned that crossing Dolma pass would be the most difficult part of the trek. However, I found the Lipulekh crossing more difficult perhaps because we were under time pressure then. Dolma pass while higher did not have any time constraints. Further, we had climbed Charan Sparsh, the previous evening almost at the same altitude. So we were fairly well acclimatized. Whatever the reason, we crossed the Dolma pass in good time. Incidentally, a mantra had been given to me during my first night at Budhi. While asleep I had received a strong suggestion that I chant Om Namo Shiv Shankar Shambhu. This was a strange sequence. While climbing however this turned out to be the perfect chant as it had a rhythm of five breaths which made me set an even pace. The astonishing sight of Gauri Kund met our eyes as soon as we crossed the Dolma Pass. This was where Parvathi is said to have bathed and Ganesha was decapitated by an enraged Shiva as he prevented him from meeting his mother.

After the invigorating sight of Gauri Kund, there was a steep descent of 4 kms or so which ponies would not be able to negotiate. This would also involve crossing a snow field. This had to be negotiated by all irrespective of their age or fitness. It is to the group’s credit that all were successful in making it through in good time Another nine kms of walk through reasonably flat terrain brought us to zunzui phu. There were a few anxious moments when a few pilgrims took longer than expected. More seriously, Vijailakshmi was taken seriously ill due to dehydration and acute mountain sickness. Immediate action taken by our redoubtable LO ensured that she was put on a drip. By next morning she was fine though.

With the difficult part of the Parikrama over, the next morning saw the pilgrims in high spirits. The picturesque route of 5 kms between Zunzui phu to Dzang phu was covered in good time. The buses were now available to pick us up and take us to the final port of call, Manasarovar itself.

At Manasarovar, we had been advised to bathe only after noon, by when the water would be warm. As soon as we landed, my wife and I rushed to find a secluded spot on the shore. Braving the cold my wife slipped on a poncho and slipped into the water. With each dip she prayed for the absolution of the sins of all her extended family members. I followed soon thereafter. Hopefully, the debt to my ancestors and my parents was paid in full.

After a sumptuous lunch, I decided to spend some time on the lakeside. Gradually, the clouds moved away and the Southern face of Kailash was now revealed to us. Patterns and shapes were being revealed – some saw an Om, others saw Nandi and so on. I wondered at the capacity of the human mind to create form out of no form and its feeble attempts to describe the indescribable. To me Kailash, shaped like a phallus was the symbol of creation and Manasarovar a symbol of the sea of consciousness of which individual consciousness was a tiny part. This individual consciousness enabled us to appreciate and revere creation and indeed nature. As the Bhagavad Gita puts it, at first there was only the One. The one then split into many in an effort to know itself. We were all part of this effort.

The next day a wonderful havan was conducted by Manikanda Murty, Mohan Raj and Kartikey Swamy in Tamil. Most of the pilgrims did not understand the words but the emotions resonated in all. 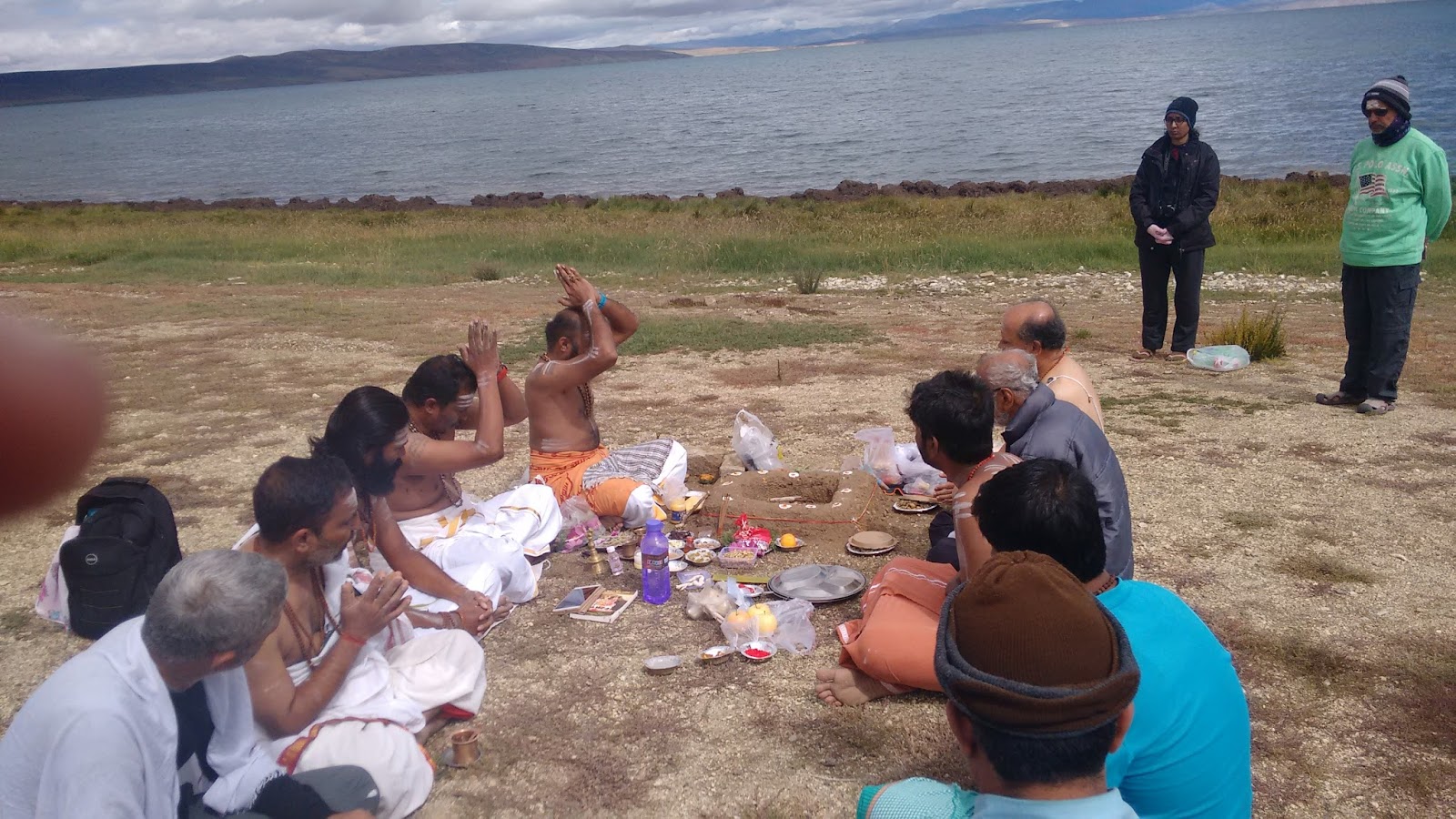 The pilgrimage was now finally over. It was only left to cross back into India and make it back to Dharchula more or less traversing the route in reverse. In high spirits, much as a horse bolts back to its stables at the end of day we covered astonishing distances of upto 27 kms in a day on our way back. The promised helilift materialised over two days. Finally, the prodigals returned home.

What had I learned? Community living, an ability to adjust and get along with people of many different regions, a gradual dropping of baggage both literal and mental, and elimination of the obsession with personal hygiene and looks. The journey of transformation was complete. We were finally where Shiva had always been -an ascetic and a renunciate.

1 thought on “A Visit to Kailash Manasarovar – Part II”