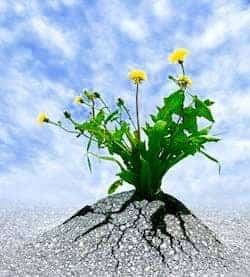 While walking along a short cut to reach my friends house I crossed an unused rail track which was littered with garbage and muck all around . I felt irritated.

As I passed over the railroad crossing . I noticed that small shrubs ,trees and beautiful yellow and red wildflowers were emerging from every nooks and corners of the exposed earth around the tracks .It struck me that through all of the garbage, God’s creation was pushing its way toward the sunshine.

All around was the ugliness of shanty houses ,rusting metal, and garbage.Yet in the midst of man’s depravity, God’s restoration process was taking place — almost without notice. Left to itself this area would eventually be overgrown with plant life. In time the metal would rust away, and all that would be left would be a beautiful forest surrounding the slum houses.But will this happen in today’s world with greed to grab the golden earth and destroy nature .

On reaching my friends place , right outside the door of my friends house a little off to the left i spotted a pothole We usually don’t notice potholes until they are large enough to cause problems. Normally I don’t either, but this one was in a precarious place right near the main entrance of the house and could not be missed . The water was a run off from an air conditioner.

Suddenly a pigeon flew from no where and perched itself at the edge of the pothole and started drinking the water from the pothole ,in the next moment two more joined and were continuously quenching their thirst.

In my younger days I despised pigeons as they spoiled car screens ,and once my hair and clothes with their droppings .they even flew in flocks into the ventilators of my house dropped dirt and made continuous sounds which at times unnerved me . To me they still reminded me of being dirty pigeons the unwelcome guests .

Suddenly, from within my heart came a conviction. I heard the voice of GOD gently whisper,

I knew GOD wanted to show me something in all this. Isn’t it funny how God can set up a scene in the strangest of places to reveal something about HIMSELF . He is always sending messages to us in our daily routine life ….We have to be in an awakened state to be able to understand them .

5 Replies to “Gods Messages for us”